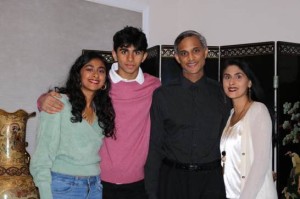 Steve Sandeep Rao, a native of Charleston, West Virginia, serves as an At Large Council Member for the Town of Morrisville and served as Mayor Pro Tem from 2015- 2017.

He served as a Senior Business Development Executive at Alphanumeric Systems, a global tech company headquartered in Raleigh from January 2011 to May 2020. He now serves as Of Counsel and Adviser to State Federal Strategies, where he advises Technology Companies on State and Local Government Business Development Strategy.

During his years in office, he has lead efforts to start a growing Entrepreneurship Program in Morrisville, English as a Second Language classes, has worked aggressively with the NC Dept of Transportation and Council to bring over $300 million of transportation investment to Morrisville in the next ten years.

In May 2020, Steve hosted John T. Chambers, former CEO of Cisco Systems and CEO, JC2 Ventures, as the keynote speaker of the Virtual Start Up Summit, where Chambers addressed the Triangle’s startups and tech entrepreneurs on how to survive and thrive in a Post Covid Economy. He plans to continue to bring Chambers and other top Executives to Morrisville.

One of his greatest economic development achievements is assisting in the sale of the Outlet Mall to Equator Capital, which is now opening as the STITCH, an Innovative Office Space for global life science and pharmaceutical companies.

As Co-Chair of the Technology Subcommittee, he has spearheaded the Town of Morrisville Smart City and Open Data Initiatives, and is working with market leading companies, like Microsoft, Cisco, and IBM on the Smart Triangle Strategy. He is also working on plans for an Innovation District and Technology Incubator in Morrisville with the goal of making Morrisville the Number One Destination for Tech and Life Science Companies in the State.

Rao also serves as a Board Member for the New American Economy, a bi-partisan coalition of Mayors and Business Leaders focused on Comprehensive Immigration Reform; the NAE Chairman is Mike Bloomberg. He also serves on the North Carolina Veterans Business Association Board.

Council Member Rao also hosts a new radio show, ‘Leaders and Legends’ on Radio Nyra, the regions first South Asian Radio station, which airs every Sunday afternoon and also as a political commentator on ‘Get with the Program’ with Gary Jones, serving a listening audience of 1.2 million citizens in five cities in North Carolina. He serves as a Political Analyst on PBS Carolina 4 on the Black Issues Forum.

He received a BA from Emory University in Political Science where he played collegiate tennis and a JD from the West Virginia University College of Law and resides in Morrisville with his wife. Dr. Komal Parekh and children Sonia, an inspiring sophomore at UNC Chapel Hill, and Rayan, a sophomore at Panther Creek and an artist.